NAIROBI, Kenya and SOUTHLAKE, Texas – Aug 17, 2017 – East African carriers, such as Ethiopian Airlines, RwandAir and Kenya Airways, are scoring significantly more for customer satisfaction and loyalty ratings among their frequent flyers than carriers in the rest of Africa – and well above the global average.  The findings were revealed in a Net Promoter Score (NPS) study that global technology provider, Sabre Corporation (NASDAQ: SABR), conducted for a group of African airlines.

The study looked into strength of brand, customer satisfaction and loyalty within African Airlines Association (AFRAA) member airlines from North, East, West and Southern Africa.  Widely recognised and used by more than 35 percent of global consumer-facing companies, the study identifies areas impacting on customer satisfaction and awards a score of between -100 and 100.

Key findings of the study:

Scores above 0 are considered good, and above 50, excellent.  The industry average for airlines is 0[1].  Overall, regions rank as follows: 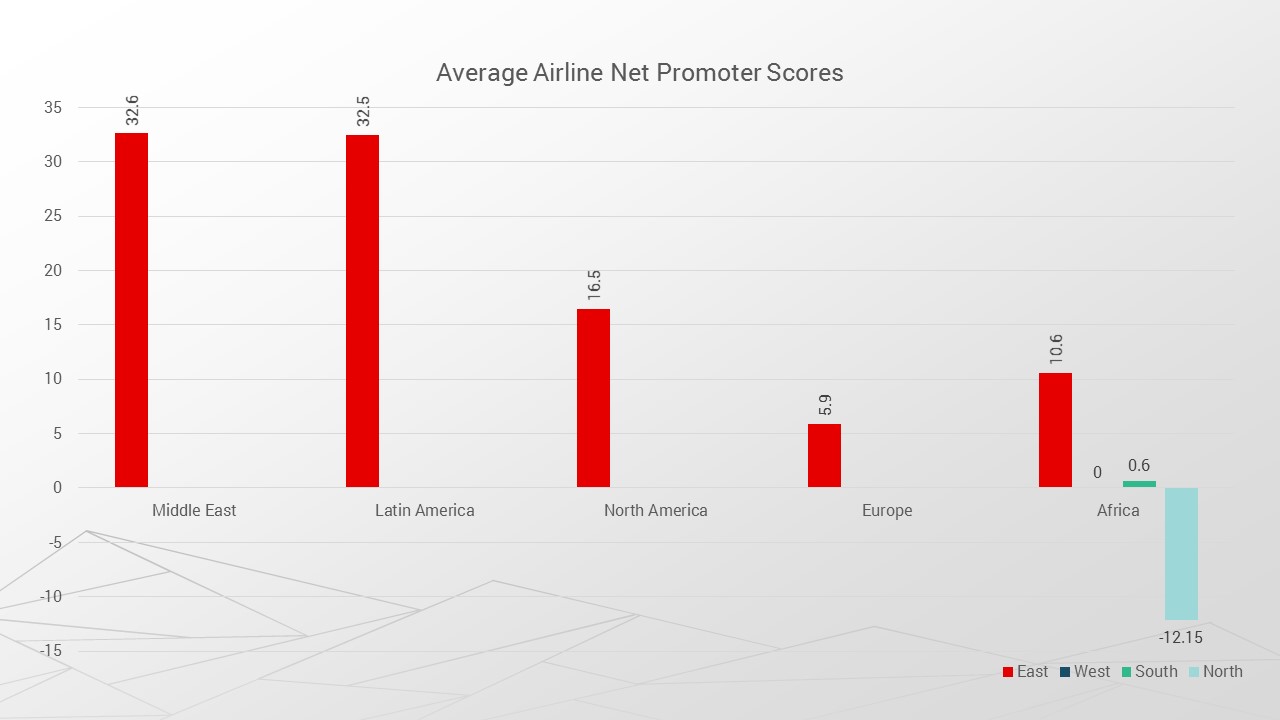 “Despite economic, political and societal challenges in Africa, airlines – particularly in the East – have invested in customer experience, satisfaction and loyalty to cultivate a positive brand reputation among travellers,” said Dino Gelmetti, vice president, EMEA, Airline Solutions, Sabre. “This has worked well for them and now the focus is on unlocking more profits by investing in the latest customer experience technology and benchmarking their service levels against the world’s best carriers; everyone from the CEO to the gate agent must demonstrate a consistent, customer-centric approach.  Air travel on the continent is expected to increase by as much as 24% after the pan-African passport is rolled out in 2018, so there’s no better time to be investing for future success.”

Each airline’s travellers were asked how satisfied they were on a scale of 1-10 with factors across four key areas – brand, customer effort, in-flight and customer service.  They were then asked how important each of these attributes were to them.  Satisfaction was then measured against importance to identify where airlines were not meeting customer expectations.

The study found that the highest-ranking attribute among passengers of African airlines was the quality of service from cabin crew.  Areas that received the lowest scores centered on customer effort – including check-in, ease of booking ancillaries and website experience.

“We are committed to helping our airlines tap into an increased demand for travel services in the continent, and have been able to set a clear path for growth by partnering with Sabre on this study”, said Dr. Elijah Chingosho, AFRAA Secretary General.  “By following Sabre’s recommendations to become more customer centric, African airlines can achieve greater profitability through increased customer loyalty.  This will then help them to win business from their international rivals.”

The study was the first of its kind performed in the region.  It aimed to help African carriers identify how to improve in order to compete with global rivals and increase revenue.  Studies by Sabre have previously found that globally on average, a +/- 1 point shift in NPS is equivalent to approximately $10-$13 million in revenue.

About the study:
To conduct this study, an NPS survey was deployed by nine AFRAA member airlines headquartered in each of the five regions of the African Union: North, Southern, East and West. The survey was deployed via email to a customer sample representative of the member airline’s customer base; if 20% of the airline’s customers experienced a service failure, 20% of the sample were those who experienced a service failure, and if 45% of the airline’s customers were members of their frequent flyer program, 45% of the sample were members of the frequent flyer program, etc. The survey was also posted on some of the deploying airlines’ websites. Keeping in mind the prevalence of mobile connectivity on the African continent, the survey was optimized for both desktop and mobile phone screens. The survey was open from 21 March, 2016 to 21 April, 2017, and overall, 15,266 survey responses were received. Of those responses, 10,443 were complete and viable for use in the study.