SINGAPORE – 8 January 2019 – Sabre Corporation (NASDAQ: SABR), the leading technology provider to the global travel industry, today announced a new, long-term distribution agreement with Cambodia Airways.  While considered a relatively new entrant to the market, operating since July 2018, the airline has ambitious plans and aims to quickly transform into a major regional carrier.

“By selecting Sabre as our first distribution partner, we are confident that we are well-positioned to execute our expansion plan, both domestically and across Southeast Asia. Sabre is, without a doubt, the strategic ally that will allow us to achieve our business objectives, as we shift our focus towards developing new routes and markets,” said Kevin Fu, Chief Financial Officer, Cambodia Airways. 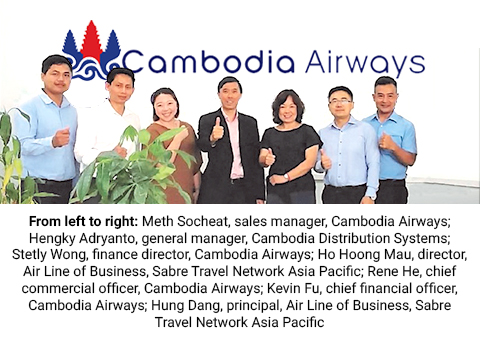 In line with the rapid development of the country’s tourism industry, Cambodia Airways is eager to pursue its growth trajectory and begin operating routes to China and Hong Kong. With concrete plans to bolster its fleet with up to 30 aircrafts within the next five years, the airline also expects to expand its intercontinental routes beyond Asia. The long-term partnership agreement with Sabre will be instrumental as the carrier focuses on enhancing their presence in key destinations, including Australia and Europe.

“Sabre is pleased to contribute to Cambodia Airways ongoing business achievements. By joining Sabre’s rich global travel marketplace, the full-service carrier will now be connected to over 425,000 agents globally, expanding the airline’s reach to travel buyers around the world. Sabre will partner with and actively support Cambodia Airways as they move into the next phase of their strategic growth plan,” said Rakesh Narayanan, vice president, Air Line of Business, Sabre Travel Network Asia Pacific.

About Cambodia Airways
Cambodia Airways Co., Ltd is a full service carrier based in Cambodia. With a registration capital of 200 million US dollars, Cambodia Airways headquarter was founded in Phnom Penh. It is committed to building a leading brand of Cambodian international carrier. Cambodia Airways obtained the approval document from the Cambodian government in August 2017 and completed the business registration in September. On July 6, 2018, it officially obtained the AOC certificate with IATA code KR. KR completed the first commercial flight between Phnom Penh and Siem Reap on July 10,2018.  By December 2018, Cambodian Airlines successfully operated six round-trip routes from Siem Reap, Westport, Macau and Taiwan with Phnom Penh as the centre.