Which emerging tech will keep travelers safe at airports and other transit hubs?

Beyond the chain-link fence

Airport security continues to be a hot-button topic for governments, operators and travel suppliers all over the world. The desire for safe and secure transit must always balance with the level of inconvenience caused by enforcing stringent (and successful) security measures.

As technology innovations accelerate, so do the security measures that protect transit facilities of all kinds. These measures are of absolute importance to all stakeholders in the travel industry. Without trust and efficacy, traveling becomes a fearful and ever-more-burdensome event, which challenges an industry reliant on transit hubs for its business operations.

Here are some technologies — both imminent and future-forward — that could soon be keeping our vital transit facilities safe and operational.

In most airports, the secured area begins inside the terminal. This solution rethinks airport access completely by expanding the secure zone to the airport perimeter. Only verified persons would be allowed to enter that secured perimeter, reducing the likelihood of an attack within the public areas of an airport. Yet implementation would be expensive, as far as staffing these extended perimeters at all times.

This type of approach could lift interest in pre-screening programs like the TSA’s PreCheck. Travelers within the U.S. would have another incentive to become a TSA Trusted Traveler. Or perhaps a partial perimeter could be implemented for only pre-verified travelers. This would allow security resources to be dedicated to the public pre-security areas while offering more convenience to pre-screened travelers.

Even though technologies such as infrared motion sensors are already boosting perimeter security, no entity outside of Israel has explicitly committed to expanding the security perimeter. For newly-built terminals, it’s a scenario that may allow safer and more efficient operation of airports.

We’ve got the Botler prowling the halls of Aloft hotels. Why not have a robot security agent? This would help solve the challenge of broader perimeters around transit hubs without necessarily increasing the complexity of managing a human deployment. It could also help eliminate inconsistent application of regulations, as well as reduce human error.

Researchers at San Diego State University have jumped into the concept of a virtual agent with its AVATAR concept. 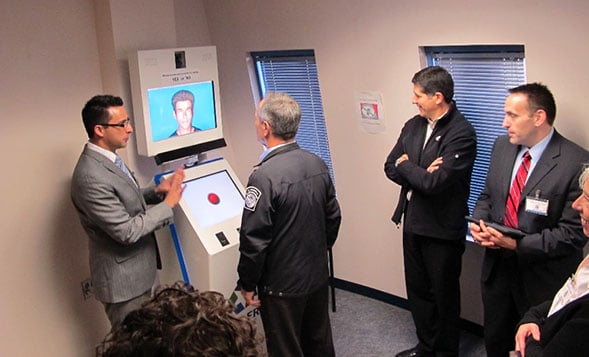 The AVATAR is not a roving security officer but a virtual agent able to detect lies and untruths. The idea is to identify criminals in a more consistent manner, without some of the biases and shortcomings of human agents. The robot can then triage travelers for further screening.

The system is fully ready for implementation to help stem the flow of contraband, thwart fleeing criminals, and detect potential terrorists and many other applications in the effort to secure international borders.

Imagine a combination between the AVATAR and a mobile Botler-style robot. These are the futuristic Robocop security patrols that might monitor the public spaces of the future.

Sabre has tested a prototype that would integrate facial recognition software into airport check-in kiosks. Samsung’s latest flagship smartphone will unlock with a glance. While this is not directly security related, it does point to the way that near-term technologies will integrate biometrics into the overall traveler experience.

Most recently, British Airways has expanded a pilot to install biometric gates across Heathrow airport. The advantages are twofold: there is certainly an efficiency gain for travelers and a reduction of human error. Travelers scan their boarding passes, look at the camera, and then are allowed through after passing the requisite checks. The rollout includes three new self-service lanes at each domestic departure gate over the next ten weeks.

“Our customers have told us that they want the ability to simplify and speed up their journeys through the airport.These are just two of the ways in which we are investing in areas our customers value most.” -British Airways Customer Experience director Troy Warfield

Major airports like Singapore’s Changi Airport are testing three-dimensional baggage scanning technologies. These are variations on current X-ray CT scanners that are able to deliver crisp, full-resolution images — in 360 degrees! The technology moves away from the flat view, which makes it much easier to analyze a bag. Agents can move around the image and even zoom closer to problem areas.

These new machines are also able to detect explosives (both conventional and liquid). One example, the Kylin system, is even able to see around corners:

“Inspecting objects in 360 degrees free of blind corners and identifying the contraband more easily with a more intuitive image.”

The ability to map the contents of a passenger’s carry-on means that there’s no need to remove electronic devices. This speeds up the security line while also increases the accuracy. It’s much harder to sneak devices through a system that has a full view into every nook and cranny! 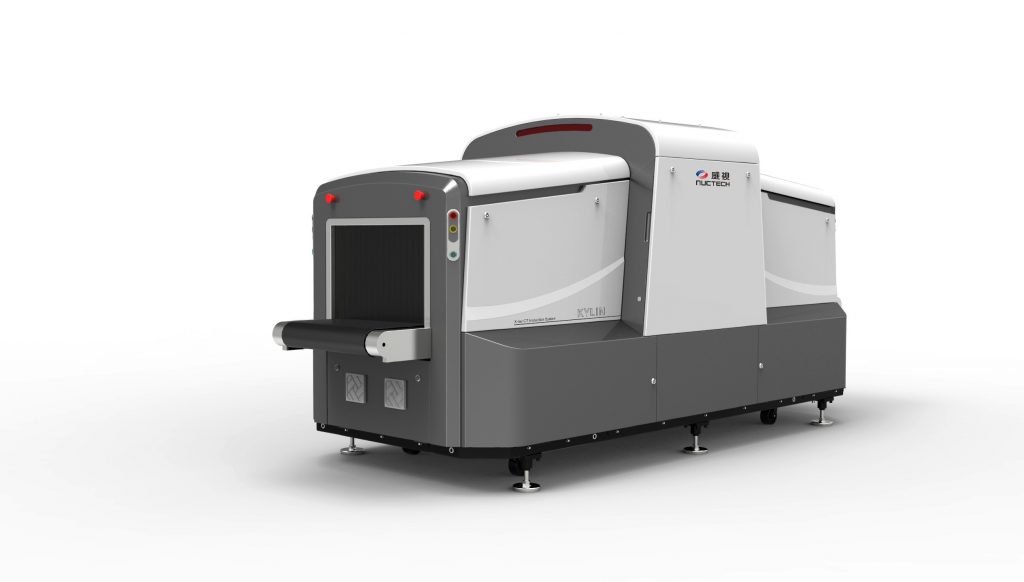 The blockchain as global identity system

Most travelers aren’t yet familiar with blockchain technology. Yet it is fundamentally appealing as a global identity solution. The blockchain is a global ledger distributed across many computers. This makes it extremely challenging to forge entries. Unlike a passport, which is only one document tied into a system, blockchain identity would have to be verified multiple times. It’s virtually unhackable. And unlike a physical item, it’s impossible to steal.

In an article exploring the possibility, technologist Houman Goudrazi says that it would be as simple as connecting your biometric information to specific parts of the blockchain:

This concept caters for a process where you don’t need to carry physical ID with you. You decide what information you want to share, and the validation process does not require you or the validating entity to send your personal information across data communication channels. The caveat is the global need for standardization.

Forgeries could be reduced, as would uncertainties around border security. As identities become harder to fake, potential security risks are reduced. This could make open borders much more acceptable to those who see unacceptable risk with foreign arrivals.

Blockchain would also give greater control to travelers, as far as the data used to identify themselves. The blockchain could create tiers of verified identities, as well as facilitate visa waivers and visa tracking. It could even be used for payments while traveling — similar to how Japan wants to offer payments via fingerprints for travelers!

With each passing year, the future comes at us faster and faster. Acceptance accelerates, even of technology previously deemed as invasive. The tradeoffs between security and convenience have always been extensive. New technologies will likely be far more invasive but will provide a speedier screening process. Ideally, the traveler will enjoy reduced friction and increased security throughout the journey.

Until then, we can make the best of the daily travel grind (see below)!