There are often opportunities to make theoretical applications more real to a business using a defined set of real-world experiments. This was the case when User Experience professionals from across three Sabre business units hosted a cognitive walkthrough of the Sprint Method.

By bringing together a cross-section of interested employees, the team exposed new ways of working to walkthrough without the stress of a revenue-generating engagement. The walkthrough was held during a muggy August week, culminating with target audiences testing a real-world prototype or business proposal.

“The key takeaway for me is that ideas can be generated very quickly, especially with the quick sketching techniques we used.” said Sarah Hoaglan, UX Team Lead for Crew Manager.  “Being able to come up with that many ideas in such a short time frame not only solidifies our original idea, but helps generate new ones that could take us in new directions.”

Six Sprint Teams were formed from thirty-two total participants, each taking on a particular Sabre business challenge proposed in the walkthrough. For example, an overhaul of the Project Lifecycle Process or an application that speeds up the project setup process. These Sprint teams worked together throughout the week to build an informed prototype for customer testing on Friday.

“The proof was apparent – the teams created better solutions and in a fraction of the time.” said Troy Whitsett, Vice President of Design and Innovation.  “With a better approach to product design, UX designers can now assist product leaders across Sabre as they work to create compelling and customer-centered solutions that will drive higher revenue for the company.”

What is the Sprint Method?

The Sprint Method is a five-day process for answering critical business questions through design, prototyping, and testing ideas with customers.  It’s a “greatest hits” of business strategy, innovation, behavior science, design thinking, and more—packaged into a battle-tested process that any team can use.

Sabre Sprint Week was used to promote the practical application and use of this method within enterprise-level project processes, the Software Development Life Cycle (SDLC) and for individual project teams and departments.

Working together using the Sprint Method, project teams can shortcut endless-debate cycles and compress months of requirements gathering and solution design into a single week. Instead of waiting to launch a minimal product to understand if an idea is any good, you can get clear data from a realistic prototype. You can fast-forward into the future to see your finished product and customer reactions, before making any expensive commitments.

Here’s how the Sprint Method works. By segmenting actions into weeks, there some very clear milestones that structure the approach. 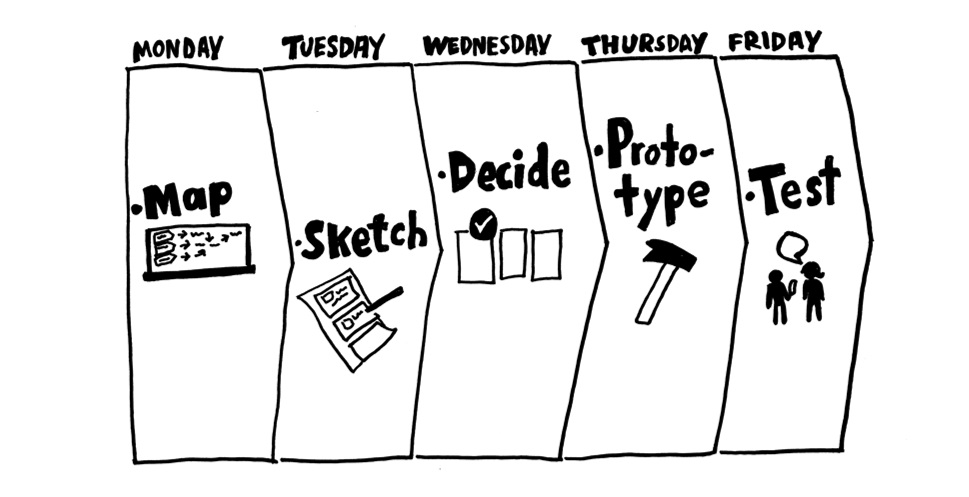 Before the Sprint begins, you’ll need to have the right challenge and the right team. You’ll also need time and space to conduct the Sprint. For Sabre, the ‘right team’ would be a multidisciplinary team representing different disciplines. From the Sprint Book:

“Sprints are most successful with a mix of people: the core people who work on execution along with a few extra experts with specialized knowledge. You ideally want to have a team of seven or fewer. The right challenge, especially for a team trying a Sprint for the first time, is one that addresses an upcoming project feature or product that’s not mission critical.”

That way, there’s an emphasis on understanding and experiencing the execution of the Sprint method without the pressures of a critical engagement. Additionally, follow-up Sprints are usually shorter by 1-2 days, and can leverage earlier learnings for other projects (including mission critical ones).

Monday’s structured discussions create a path for the week.

After a full day of understanding the problem and choosing a target for the Sprint, on Tuesday, you get to focus on solutions.

By Wednesday morning, you and your team will have a stack of solutions. That’s great, but it’s also a problem. You can’t prototype and test them all—you need one solid plan.

On Wednesday, you and your team created a storyboard. On Thursday, you’ll adopt a “fake it” philosophy to turn that storyboard into a prototype.

By Friday, you’ve created promising solutions, chosen the best, and built a realistic prototype. That alone would make for an impressively productive week. But you’ll take it one step further as you interview customers and learn by watching them react to your prototype. This test makes the entire sprint worthwhile: At the end of the day, you’ll know how far you have to go, and you’ll know just what to do next.

At the end of the week, you’ll recap the process and the week to see what was accomplished and how each step unfolded to the end. By taking this time to recap the action, there will be a documented outcome that forms the basis for future engagements.

A successful sprint — all without breaking a sweat!

What’s next for Sabre Sprint Week?

A follow-up to Sabre Sprint Week is currently being explored for the first part of 2017.  The event would invite various Sabre project teams to complete in a full week Sprint, exploring their top initiatives for the year with real customers and end-users. Additionally, two pre-Sprint Week demos are planned for 2016 to prepare for next year’s event.

As more teams are exposed to the power of the Sprint Method, we see the concept forming the bedrock of a rapid-iteration framework that defines the future of our business.