If jumping into the augmented reality games craze is not realistic for your travel brand, how about Snapchat? The emerging media platform has recently spiked in popularity. Snapchat has nearly 60 million monthly active users. And when it comes to daily users, the platform recently surpassed Twitter to become one of the most used social media platforms.

Yet many are baffled by the platform. Snapchat’s non-traditional user interface can be difficult to master and it’s not entirely clear about how to engage with the platform. Since the normal mechanic of following a brand doesn’t exist, it’s not entirely clear how to engage with consistent organic content. Cathy Boyle, principal analyst with eMarketer, told the Drum that it’s all about the visuals:

“The highly visual interface and the features that enable users to get creative with the images they share, and tailor them to specific locations or events.”

Boyle says that it also marks a shift in consumer behavior that marketers must not ignore. “Snapchat has tapped into a key change in consumer behavior: The desire for intimate one-to-one or one-to-few communication as opposed to broadcast-style sharing across an entire network.”

Given that Snapchat is different, it requires a bit of a sideways approach. Take a look at this idea to see one genius way to tap into the Snapchat magic.

Casper is a company that sells mattresses. It’s not directly involved in selling experiences of an active sort. After all, people sleep in its product. Yet, the company understands culture well. It gets the importance of a good night’s sleep is challenged often by the appeal of going out, doing things, seeing friends — and sharing it all on social media.

So the brand hacked Snapchat.

It created a simple experience at Late Night Snap Hacks where users can pretend to be out on the town. Right from the comfort of their own bed. There’s no more fear-of-missing-out. Just head over to the URL on your phone, record, add a caption and post. Boom, your friends think you are out on the town.

Sure, it’s a gimmick. But it works. And it shows a fundamental understanding of both the platform and the underlying psyche. For travel brands, this very same FOMO can easily be leveraged to build up a unique way for Snapchatters to engage with a destination or travel experience.

What kind of snaphack can your brand come up with? Could an airline engage with its flight crews to build up a snap library to share with travelers? Could a hotel curate snaps of popular experiences nearby to encourage Snapchatters to share the aspirational experience? Or even, as one commenter on Snapchat suggested, could a brand created a series of snaps for home-bound remote workers to appear as if they’re working in exotic destinations around the world?

Data to back it up

So now that you’ve been inspired to jump into Snapchat, here’s some data from eMarketer. Use this data to inform conversations about investing in Snapchat and the future growth of the platform. The growth rate between age groups 25-44 is especially steep. By the end of 2017, there will be an additional 3.3 million users in that demographic.

Other key talking points are that millennials account for 7 out of 10 Snapchat users, and on any given day in the U.S., Snapchat reaches 41% of 18-34 year olds.

While this data is exclusive to the United States, the figure quoted at the start of this article is global. So that means that there are 150 million users around the world using Snapchat each month — plenty of fish in this sea! 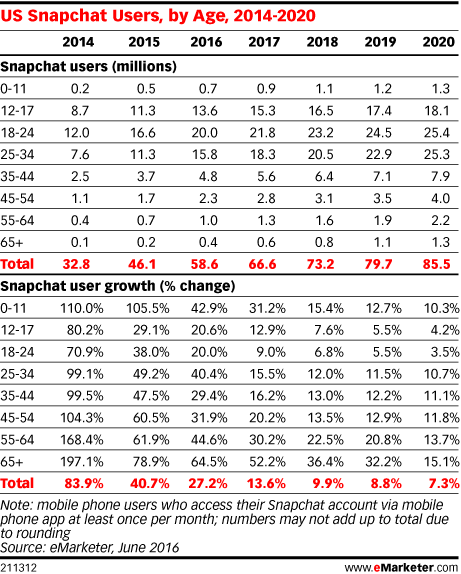