Middle Eastern carriers have changed the way travelers fly across world. This is especially apparent when analyzing recent international traffic trends in Africa. In this report, we will look at the African International air travel trend since 2010, and analyze the shift from Europe to Middle Eastern countries.

#1: Four key trends in traffic within the African region

Africa achieved impressive economic growth over the past 15 years with the average GDP rising from just above 2 percent during the 1980-90s to above 5 percent between 2001 and 2014. Africa’s economic growth has been robust until 2014 despite some countries suffering from Ebola epidemic and political unrest. In 2015, Africa’s economy saw only 3.2 percent GDP growth. In 2016, GDP growth descended further to a mere 1.3 percent last year — its lowest level in over two decades.

Sudan and Ethiopia are likely to see higher growth in the region due to political-economic ties with Saudi Arabia. Algeria and Nigeria are also fast-growing economies in the region, with potential for aviation growth. Benin, Côte d’Ivoire, DRC, Senegal, and Togo have seen growth in last 5 years. Countries like Egypt, South Africa and Morocco despite slow growth, are very big in terms of air travel and are lucrative for the volumes they generate.

Legacy European carriers are facing competition from low-cost carriers like Ryanair and EasyJet. Increasing operational efficiency can help them compete in the existing markets. They should also look at new growth opportunity in fast growing economies. They can also tap increasing traffic to the United States by providing right connections on their existing network.

Africa is also increasing ties with India and China. Middle Eastern carriers can collaborate with Indian and Chinese international players to mobilize traffic from Asia to Africa. Europe had colonial relationship with Africa and it will continue to be biggest international market from Africa.

#4: Most popular international destinations from Africa

The majority of travelers are heading to Europe. And while this trend has been stable over the past decade, other regions are gradually gaining share. 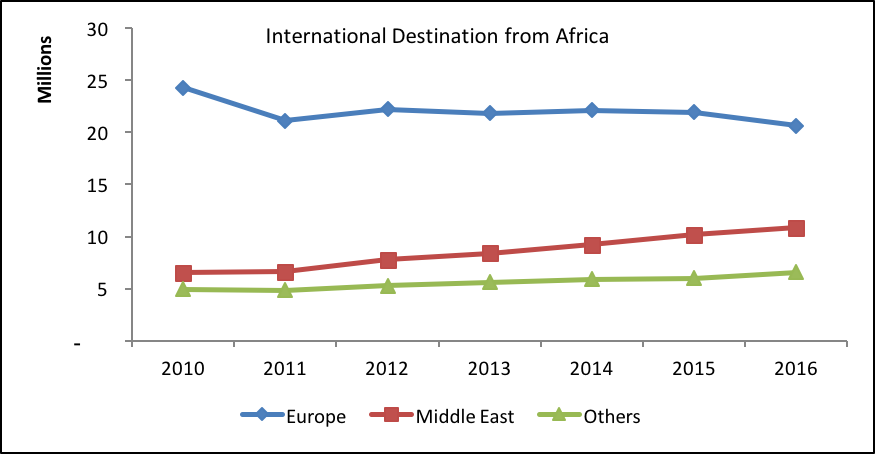 While the aggregate passenger numbers have shifted, the actual share of travel is much more revealing. It shows how quickly the dominance of Europe has diminished. From 2010 to 2016, the dominance of Europe has greatly diminished. The Middle East gained ten percentage points, in part due to the great number of flights transiting through that region.

Despite this shift towards the Middle East, Europe will continue to be a big market for air travel and will drive volumes. Legacy European carriers are facing competition from low-cost carriers like Ryanair and EasyJet. Increasing operational efficiency can help them compete in the existing markets. They should also look at new growth opportunity in fast growing economies. They can also tap increasing traffic to USA by providing right connections on their existing network. 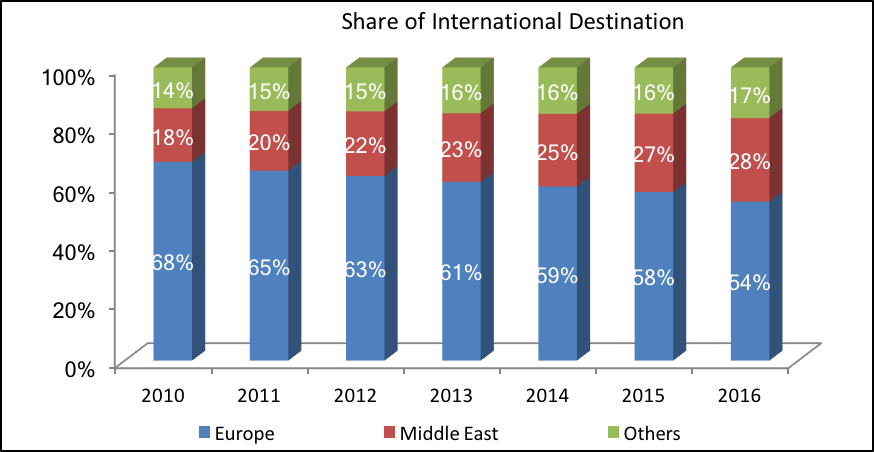 #5: Carriers carrying the most international traffic

The spread of passenger traffic across airlines from Africa, Europe and the Middle East mirrors much of what the rest of the world has seen — especially with the increase of traffic from the Middle Eastern carriers. For many years this steady growth has been at the expense of European carriers.

Yet as the graphic above shows, European carriers saw a significant dip in passenger traffic in 2016. And it was not just due to the steady inceases enjoyed by the Middle Eastern carriers. African carriers have developed much stronger positions on the continent, and have managed to attract a much larger share of travelers year-over-year. 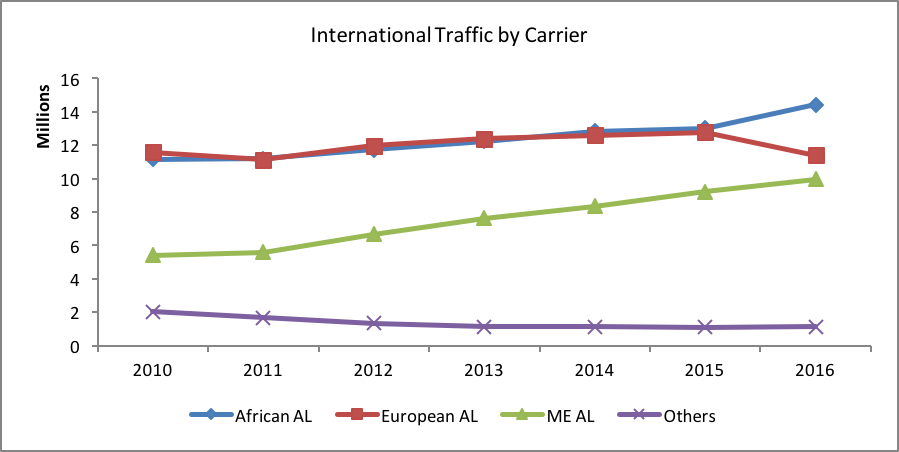 Asian carriers looking to enter African markets can partner with Middle Eastern carriers which will not only help them enter Africa but these super connectors can move traffic from other parts of the world to Africa.

#6: Growth of the international capacity of the top carriers

Among African airlines, Ethiopian Airline and Air Algérie are growing the fastest. It is also seen that the biggest African airline, Egypt Air (MS) has shown increased in capacity for International markets, but reduced capacity in domestic sector. Table below shows one-way OD passengers carried by top airlines in Africa.

Economist predicts higher growth rate in 2017 and expects growth to show continuous improvement in coming years. Africa will get back on a trajectory of growth, urbanization, and modernization.

Six out of ten fastest growing economies in the world are in now Africa.

Intra-Africa travel is underserved, and, with growth in the economy, this can drive growth in the aviation sector. Countries like Benin, Côte d’Ivoire, DRC, Senegal, and Togo are seeing good economic growth. Expanding operations to these growing economies looks lucrative.

Overall fares have dropped due to increase in competition. To tap growth of middle –class section in Africa, fares may further drop increasing overall air travel and business. Legacy African airlines should focus on increasing operational efficiency and innovative solutions for profitable business.