Here comes Cuba, part 1: The most popular routes for U.S. business travelers into the Caribbean

Earlier this year, we pulled Sabre data to make some predictions on which routes the DOT would select for commercial flights into Cuba. The aggregate Caribbean travel data offered a suggestive analysis of which routes could prove to be the most beneficial to passengers — and thus make the cut for the first U.S. commercial flights to Cuba in decades.

But what about business travelers? There’s a rare opportunity for businesses to come into an untapped market and build a strong foothold through rapid economic expansion. Those businesses with existing ties to the region are well-positioned to leverage those relationships into Cuba, and also to benefit from the opening of direct commercial flights to the country.

By taking a look at the gateway cities into the Caribbean, we can see which cities are either home to businesses targeting the region or important transit hubs. Each of those considerations matter to the DOT as it selects the commercial routes into Havana and Cuba’s other airports. 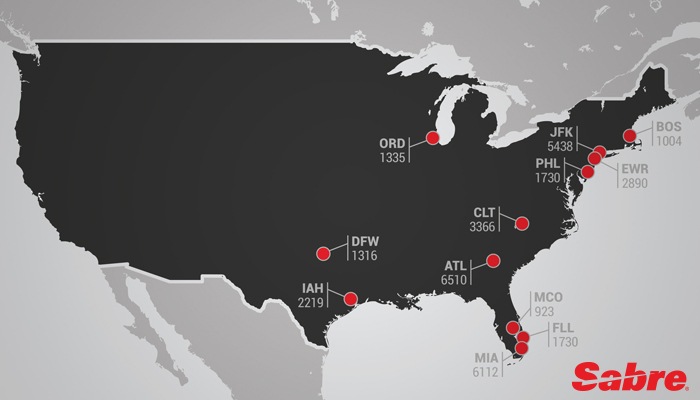 The most popular gateway cities for business travel to the Caribbean. Note this isn’t commercial travel to Cuba since those flights are not yet allowed.

The top three gateway airports to the Caribbean are JFK, ATL and MIA. Extrapolating from this result, some conclusions can be suggested: Miami is popular due to the number of flights available for transit, as well as the significant ex-patriate community from the Caribbean. JetBlue’s focus on JFK pushes traffic through to the region, not to mention a large diaspora residing in the NY/NJ areas and plenty of large companies pursuing business deals.

Atlanta is an unexpected result. While the city is not known for a large Caribbean influence, the city is Delta’s main hub. This brings most transit traffic through the airport. The agricultural industry is also eagerly eyeing the Cuban marketplace, as there are already existing relationships between farmers within the Caribbean’s various markets. Poultry is the largest export to Cuba from Georgia, followed by animal feed products and prepared proteins — this ranks Cuba 31st on destinations for the state’s agricultural products.

Given the existing ties to the Caribbean, each of these hubs stand to play a critical role in expanded trade with Cuba. The DOT has now announced which airlines will fly commercial routes to Cuba which will position the winning cities well for increased business with the country.

This is part one of a two-part series. Read the second part here.