Demand for direct travel to Cuba starts to grow as flights begin from U.S.

Cuba in the news throughout 2016

From the applications to fly direct into Cuba to the death of dictator Fidel Castro, the island nation continues to capture headlines. Our own analysis of Cuba revealed a shifting interest in travel to the country.

First, we had a surge in shopping when President Obama became the first U.S. president in modern times to visit Cuba. Next, we considered what the relaxation of trade restrictions might mean for business travel in the Caribbean. Finally, we analyzed the data to see which countries had the most active business travelers to Cuba. Altogether, the image showed a vibrant interest in both leisure and business travel to Cuba.

The Cuba story comes full circle this week, with the first commercial flights leaving from the United States bound for Cuba this week. While there is some uncertainty as to the ongoing openness between the U.S. and Cuba, American airlines are sticking to the schedule. But has this newfound convenience of direct flights made American travelers change their booking behaviors?

What the advance booking data says

After pulling the data for bookings to Cuba, we compared historical differences in booking patterns. The primary hypothesis was that the availability of direct flights through commercial carriers would shift travelers away from transiting through Mexico or the Caribbean. Since a non-stop is more convenient, more travelers would opt for those.

But the data shows otherwise. While there was some shift away from bookings through Mexico and the Caribbean from some cities, the majority of travel to Cuba from American still funnels through at least one stop. This is likely due to two important factors: price and in-destination amenities. 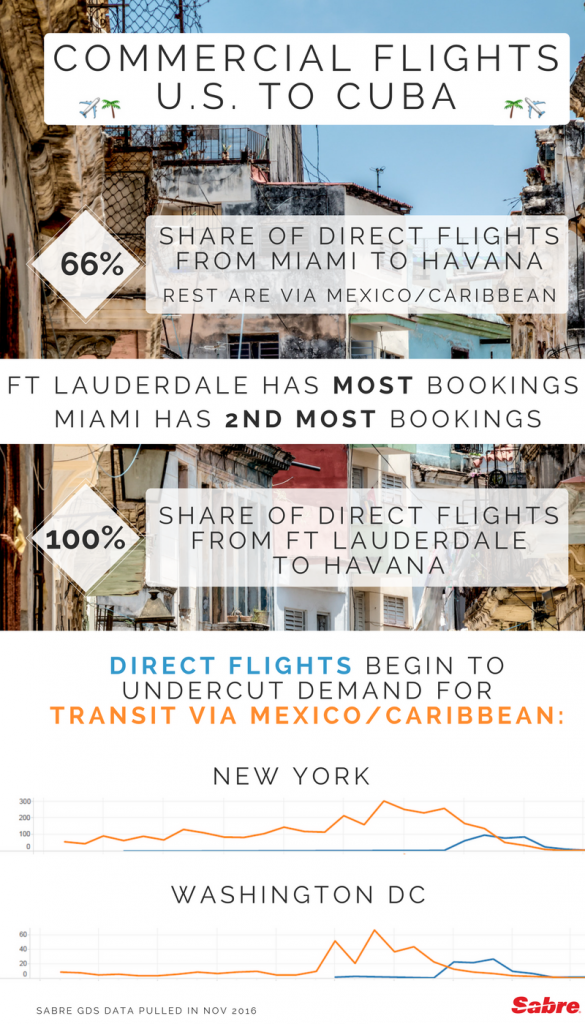 Another explanation of traveler tendency towards split-routings is price. Non-stops are generally more expensive. With most airlines operating on the hub-and-spoke model, there can be pricing advantages built into transit hubs.

In addition, there are local airlines (such as AeroMexico) that offer competitive fares out of major Mexican airports. There is less competition for the new direct-to-Cuba routes, which offers airlines a buffer from head-to-head competition with other airlines flying the same route.

Cuba is still going through efforts to modernize its tourism infrastructure. While travelers from countries outside of the U.S. have been visiting Cuba for decades, the amenities remain basic. Only recently have international hotel brands taken root in the country. In addition, the informal tourism economy is now a bit broader. State control still dominates, but more entrepreneurs are being brought into the fold to provide housing and food to visitors.

This means that certain travelers might not be willing to spend a whole week in Cuba. This would explain the continued routing through Mexico and the Caribbean. Certain categories of travelers want to enjoy more amenities during a trip and thus only split off part of a vacation to visit Cuba.

There are limitations to the number of commercial flights to Cuba from the United States. This leads to a constricted schedule that offers fewer options. If travelers are able to find a routing through Mexico or the Caribbean that is preferable, then they may sacrifice travel time for departure or arrival windows.

Regardless of reasons, this emerging destination for American travelers will continue to grow. That is, as long as the incoming government allows this growth to continue.