Travel has long been about connecting people and places, about understanding our past and embarking on future development. In her newly announced role as Senior Vice President of New Market Development, Dana Jones is now responsible for helping to facilitate such opportunities for two of the fastest growing economies in the world – Africa and China. This comes in addition to her existing role as Chief Marketing Officer and Senior Vice President of Solutions Management for Sabre Airline Solutions, the foremost provider of technology solutions for the world’s leading airlines. The expanded role is a testament to her talents in bringing people and ideas together.

I had some time to catch up with Dana during an executive strategy session in Dallas a couple of weeks ago. In the midst of 2016 planning and managing her existing role in growing the Airline Solutions business, Dana’s demeanor was optimistic and unwavering. “No two countries or continents are exactly alike, which is what makes focus on these parts of the world so intriguing,” she told me. “I’ve seen firsthand the positive impact that the right technology can have on businesses and geographies. To have a chance to bring it to such pivotal parts of the world is more than just an exciting new opportunity, it’s a privilege.” 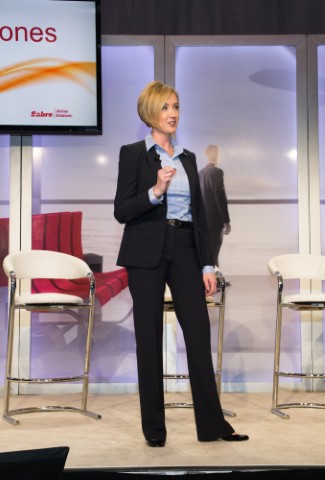 Speaking at the 2015 Airline Solutions Summit

Tom Klein, President and CEO of Sabre, agrees that Dana is just the right person to build a stronger presence in such critical parts of the world. “Dana is a proven global leader with an outstanding track record for driving growth and customer engagement,” he says in the press release officially announcing the new role “We are bringing together the foremost management in a new business development area where we can better serve our customers at the pulse of economic growth.”

Bringing Sabre technology to the airlines, hotels, travel agencies and corporations in these unique regions is no small feat, which speaks volumes of the woman who is leading the charge to make it a reality. Over the next several months, Dana will be digging deeper into the nuances of each region from social, political, and economic perspectives. Economic growth drivers, travel trends, and culture are also important factors to consider, she explained.  While Africa and China are vastly different from each other, both parts of the world are in a position to benefit from innovation that is changing the way people traverse the globe.

An interesting aspect of both China and Africa, and one that already has Dana’s attention, is how the emergence of new mobile and social capabilities is paving the way for travelers to visit countries that at one time felt exotic and distant. These same advancements also mean the emergence of commercial opportunities that drive intra-region travel. Moreover, the lines between business and leisure travel are beginning to blur, which means attention to the traveler experience – something that the Airline Solutions business is already highly focused on, becomes more important than ever. As the complexity of travel patterns like these increases, so does the ability for the airlines, hotels and travel agencies that service them to operate efficiently. Business intelligence and technology that helps travel providers scale to accommodate such growth becomes critical to growing the infrastructure of such thriving global markets. This impressive feat is what Dana plans to drive over the coming months and years. “I’m looking forward to this opportunity for the same reasons that I fell in love with travel – meeting new people, visiting new places and having the chance to learn something new every day.”