Breaking buzzwords: Everything you need to know about cloud

James Anderson on May 11, 2017
Around the Industry

Cloud is a technology buzzword with many meanings. Dropbox is cloud. Microsoft Office 365 is cloud. Salesforce is cloud. Any software that you access via the Web is technically cloud. ‘Cloud’ is so prominent in today’s technology industry lexicon, that it is hard to remember a time without it.

The standardization of ‘cloud’ is very recent. Consider that a 2004 review of the Beta release of Amazon Web Services never mentions the word ‘cloud’. And ‘cloud’ does not show any prominence in Amazon’s blogs until 2006!

So by the time the National Institute of Standards and Technology (NIST) published a definition of Cloud in 2011, the NIST researchers had had at least seven years to observe the rise and evolution of cloud computing to guide their definition:

“Cloud Computing is a model for enabling ubiquitous, convenient, on-demand network access to a shared pool of configurable computing resources (e.g., networks, servers, storage, applications, and services) that can be rapidly provisioned and released with minimal management effort or service provider interaction.”

The essential characteristics of cloud

There are five key traits that cloud infrastructure has:

Cloud services can generally be broken down into three service models: Infrastructure as a Service (IaaS), Platform as a Service (PaaS) and Software as a Service (SaaS). Each of these has a similar component stack. The difference is which parts of the stack are managed by the provider and which are handled by the consumer.

By understanding these traits, you’ll be able to understand the differences between modern cloud infrastructure and traditional solutions. in general, traditional solutions have the consumer manage the entire stack in the leftmost column. Cloud is primarily identified by its ability to share resources and scale up and down according to demand.

The paradox of choice

Clouds are not only hardware. Clouds have multiple attributes and can be categorized by each of the following attributes:

The following matrix gives an idea of what kind of cloud is created by different combinations of attributes. 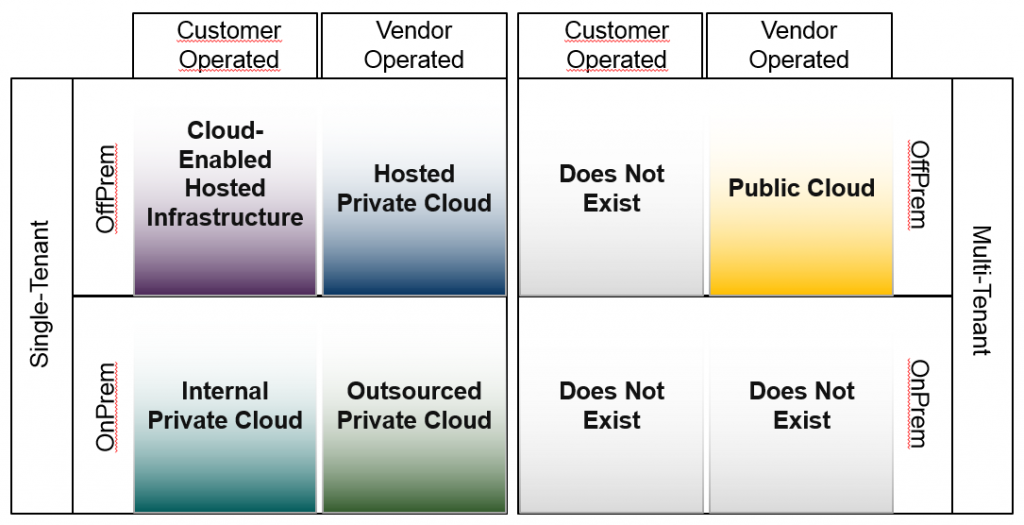 The interworkings of cloud location, tenancy and operator responsibility.

Cloud is NOT the resurrection of mainframe

You might be familiar with the term ‘mainframe.’ Up until recently, the mainframe was the primary way for businesses to process large amounts of data reliably. As the data processing speed increased, and storage costs decreased, the technology shifted to be more nimble. . Today we have an abundance of choice, which can lead to a high anxiety of making the wrong choice.

Rackspace’s article promoting the launch of the Rackspace Cloud captures the key difference between Cloud and Mainframe:

“As this landscape has evolved, some have dismissed cloud computing as just a return to the mainframe era. This view is fundamentally wrong. Mainframes were available to only the smartest employees at the richest companies. The cloud is accessible to all, and usable by anyone, at low cost. Its ubiquity is the source of its power.”

The Cloud is accessible to “two guys in a garage” where mainframes were the bastion of big banks, Wall Street Firms and the world’s largest airlines. Cloud democratizes computing and puts power into the hands of anyone who is willing to challenge industry incumbents for market share.

Captured your interest? Good, read on! Bored to tears? Fair enough, stop here! The concepts in the final section should help a next-level understanding of how cloud companies structure and sell their services.

It’s virtual because the full capacity of the device is potentially shared across customers. The opposite of virtual is dedicated, where the device is only used by a single user.

With the virtual private cloud, enterprises can assign their own range of private IP addresses, create their own subnets and connect back to their physical data centers with VPN. Even though ‘private’ is contained in the name of Virtual Private Cloud, it is still considered Public Cloud.

A fully Private Cloud can be deployed on on-premise cloud hardware. This allows customers to have dedicated cloud hardware in their data centers. Enterprises can piece together network, storage and compute hardware for their private cloud, or they can work with a vendor for an integrated software and hardware suite installed on- or off-premise.

The cloud is everywhere! Hopefully this article helped you understand it a little bit more than before.