Are you certain that your airfare promotions are making money?

Airlines have a predictable demand curve related to the seasonality of the business: more people fly during holidays and summer breaks. This means that airline revenue managers have to be quite sophisticated when crafting commercial programs. On one hand, revenue must be optimized so that there’s nothing left on the table. On the other, deep discounting and other brute-force promotions can impact brand positioning with travelers. A straightforward promotion might also be targeting the wrong demographic with the wrong offer at a less-than-optimal time.

Can you guess what I’m going to say next?

You guessed it: data. The ability for airlines to offer sophisticated promotions relies less on intuition and more on historical and real-time data. A layered approach doesn’t exclude a revenue manager’s own expertise. In fact, it’s this layered experience that allows those responsible for revenue to test assumptions and pursue educated theses about what promotions work best to achieve revenue targets.

Let’s optimize our promotions with data

Airlines are data exhaust machines. There truly is a massive amount of data that can be sliced and diced according to various needs. In fact, the sheer volume of this data overwhelms many decision makers. The “capture everything” mentality has rapidly shifted to include “capture everything but store it in a way that we can use it.” Without proper storage, a data lake lacks the logic necessary for success. Data without context is useless.

When it comes to promotional fares, a scatter-shot approach has traditionally been most popular. Monitor the competition, deliver predictable “fare sales” seasons to travelers during low season, and match previous booking behaviors with current trends. But what if machine learning can aggregate all available sources and make recommendations on what fares to tweak on which routes?
That’s optimizing promotions!

Our data science team took this concept and built a prototype that builds off the current model of using demand simulation to plan promotions. While simulating the expected demand for a given promotion is useful, it doesn’t always tell the whole story. The main gap is in the post-promotion analysis. It’s a complex undertaking to build the simulations correctly when determining promotions. That time investment continues even after a promotion has finished. It takes time to work through the actual results, and the analysis is prone to error. 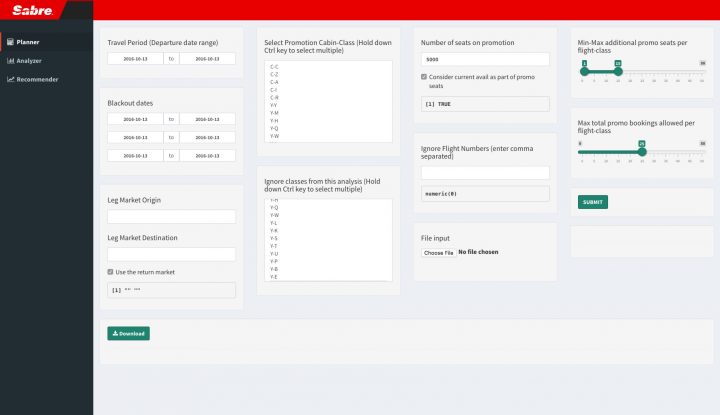 We spoke with Amol Deshmukh, as he walked through a live version of the Promotion Optimizer. Deshmukh is pleased that his optimization tool is already out in the wild, being tested by customers.

What is Promotion Optimizer? What problem does it solve and for whom?

[Promotional fares are widely used by many airlines to help stimulate new sales during periods of soft demand for air travel.  When managed correctly, promotions can be a ‘win/win’ for both customers and the airline. Airlines use their revenue management systems to help identify markets and dates which generally require demand stimulation via promotions.

However, determining beforehand the correct amount of seats to make available (and on which flights) and gauging the resulting sales effectiveness following the promotion are complicated, time-consuming tasks. Promotion Optimizer is an application for airline promotion analysis and optimization.

However, determining beforehand the correct amount of seats to make available (and on which flights) and gauging the resulting sales effectiveness following the promotion are complicated, time-consuming tasks. Promotion Optimizer is an application for airline promotion analysis and optimization.

What are the technology challenges that you solved/overcame to put this together?

I learned a new technology called ‘Shiny’ which is a package in the language ‘R’. Hence it comes with all the benefits we get from ‘R’. It helped me create a web based application which can be easily hosted. The benefit is I can provide the web link to anyone and the user does not need to install anything.

Right now, how are airlines generally managing their promotions?

Before starting the project, I spoke to few airlines to understand their current process. When airlines decide to have a promotion, they are doing some analysis to determine which flights they could choose. Typically the analysis is in excel and not an automated process.

Secondly, there is no fixed formula for calculation and it could also change from one analyst to another. The other difficulty is to upload the analysis back into the revenue management system where there is room for error.

The product “stimulates demand without the risk of revenue dilution.” Explain more about how that works.

The system determines flights with low demand. Hence promotion seats are sold in flights which anyway would have gone empty. System comes up with optimal distribution of promotion seats based on a score to rank flights from absolute bad to ones with high demand.

How can this data be used by an airline to improve its revenue, operational efficiency and overall profitability?

There are 2 main advantages: reducing human error and greater precision. Since this is an automated process, there is no room for human error. And the system guarantees absolute optimal solution based on all the data for flights

Looking ahead with this project, where do you see it going? What are the next steps?

Promotion Optimizer is divided into three main components: Planner, Analyzer, and Recommender. So far we have nailed the Planner. This provides the pre-promotion planning, scheduling, and allocation of seats to particular flights and departure dates.
1.      Planner: Pre promotion planning, scheduling or allocating seats to flights and departure dates
2.      Analyzer: Post promotion performance analysis, evaluation of demand, segment mix, revenue dilution etc.
3.      Recommender: Long term planning, support decisions on when and which markets to have promotions
So far we have only worked on the first piece. The other 2 components can help airlines with long-term planning.