Nick Vivion on October 18, 2016
Around the Industry

Five questions for people working in and around the ecosystem of travel. From technology providers to vendors to marketers to suppliers, these are the people behind the ideas powering travel. Read more answers to 5 questions here.

On July 26, 2016, the Solar Impulse landed in Abu Dhabi. The aircraft made history by circumventing the entire world using only solar power. While this impressive achievement was many years in the making, the milestone boosted the global narrative around alternative propulsion.

The technology around solar cells has evolved enough to make this flight possible. And while solar isn’t yet flying hundreds of passengers on a commercial jet, the technology has come a long way. These extended engagements provide scientists and industry time and space to explore the opportunities that lie ahead when using solar as propulsion. After all, in only 7 years, the Solar Impulse team went from the first test flight to a journey around the world.

In videos shared online, the team discusses this historic achievement in aviation and how technology played a pivotal role in facilitating the journey. In addition to the official Solar Impulse spokesperson (SP), co-captains Bertrand Piccard (BP) and André Borschberg (AB) shared more about the future of the Solar Impulse project.

Congratulations on such a historic achievement – 40,000 km traveled without fuel. What does this milestone mean for the future of aviation?

BP: This is not only a first in the history of aviation; it’s before all a first in the history of energy. I’m sure that within 10 years we’ll see electric airplanes transporting 50 passengers on short to medium haul flights. But it’s not enough. The same clean technologies used on Solar Impulse could be implemented on the ground in our daily life to divide by two the CO2 emissions in a profitable way. Solar Impulse is only the beginning, now take it further! 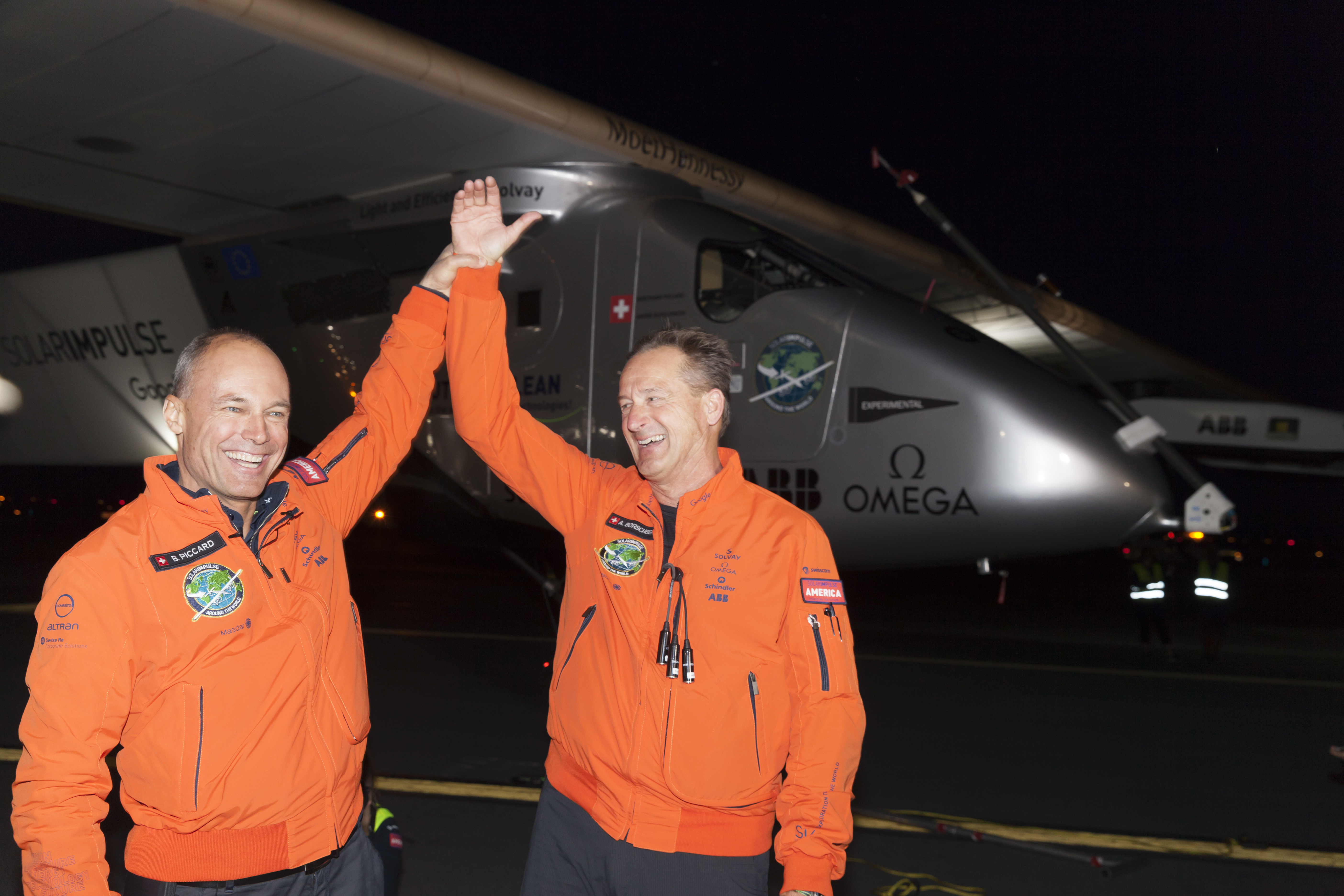 AB: Flying one leg with a completely new type of airplane is difficult enough, but flying around the world is a real challenge. More than a demonstration, it’s the confirmation that these technologies are truly dependable and reliable. There is so much potential for the aeronautical world: while one hundred percent solar powered airplanes might take longer to materialize, electric airplanes will develop in the near future because of their tremendous advantages such as energy efficiency.

SP: The aviation industry it is already changing: while the technologies to transport passengers on a one hundred percent solar airplane aren’t yet available, electric airplanes should develop in the near future due to their energy efficiency.

The plane traveled at around 46 miles per hour. It’s hard to fathom is just what it was like floating through the air at that speed – and without much sound. What was it like? What did you think about as you observed the plane’s progress?

SP: This video shares much of what it was like in the sky for Captain Piccard, something easier to show than to describe!

For those of us who work in travel for a living, this journey had much magic to it. What’s next for the technologies that you’ve tested with Solar Impulse?

SP: Solar Impulse has demonstrated that we can reach perpetual flight using the sun as continued source of energy. By designing and building Si1 and Si2 the team of engineers has developed a unique understanding not only of the development of modern clean technologies but also of the challenges related to their implementation.

In addition, being the first to make solar powered airplanes fly across the world in many different countries and airspaces, Solar Impulse has also gained global and significant operational experience as well as expertise in weather and route planning.

The goal is now to leverage the skills, expertise and technology gained over the past decade in the fields of electric propulsion and solar energy and to launch new innovative and disruptive projects.

Among others, the team of engineers is already working on unmanned and high endurance solar powered electric aircrafts that could fly in high altitude for months, offering services that could provide exponential added value and complement the work being done by satellites today in a flexible and sustainable way.

AB: Solar Impulse is of course very well positioned to contribute to the next generations of manned or unmanned electric aircrafts. By capitalizing on the engineering skills and expertise gained over the past decade, we will continue to work to encourage concrete innovations and disruptive solutions.

And what about for yourself. What’s next for you after this accomplishment?

BP: We have flown 40’000 kilometers without fuel, but there is still a lot to be done to encourage a worldwide implementation of clean technologies and to motivate everyone to reduce their dependence on fossil fuels in their daily lives, hence the creation of the International Committee for Clean Technologies.

Outside of the technology, one of the other impressive achievements has been the steady coverage from the global media. If you could share 2-3 key tips to those striving to capture attention in today’s media-rich world, what would they be?

SP: Solar Impulse started off with the vision of building an airplane capable of flying night and day without using any fuel, propelled solely by solar energy. In recent years, Social Media became and still is an extremely powerful tool and therefore an important means through which  to convey our messages to large audiences.

This prompted us to launch the FutureIsClean campaign to create a federation of organizations pushing the replacement of old polluting devices by existing clean technologies. Everyone that has followed Solar Impulse around the world, including our supporters and partners, can continue to promote this message and spread the word by joining the Future is Clean movement and demand concrete actions for a clean future.